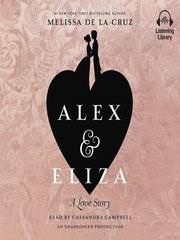 As battle cries of the American Revolution echo in the distance, servants flutter about preparing for one of New York society’s biggest events: the Schuylers’ grand ball. Descended from two of the oldest and most distinguished bloodlines in New York, the Schuylers are proud to be one of their fledgling country’s founding families, and even prouder still of their three daughters–Angelica, with her razor-sharp wit; Peggy, with her dazzling looks; and Eliza, whose beauty and charm rival those of both her sisters, though she’d rather be aiding the colonists’ cause than dressing up for some silly ball.

Still, Eliza can barely contain her excitement when she hears of the arrival of one Alexander Hamilton, a mysterious, rakish young colonel and General George Washington’s right-hand man. Though Alex has arrived as the bearer of bad news for the Schuylers, he can’t believe his luck–as an orphan, and a bastard one at that–to be in such esteemed company. And when Alex and Eliza meet that fateful night, so begins an epic love story that would forever change the course of American history.

The tale of Alex and Eliza is written so beautifully by Melissa de la Cruz, that it seems too good to be based on real people.  Of course, I had to remind myself at times that this was not an exact account of Alexander Hamilton and Elizabeth Schuyler’s early relationship, but if you told me it was, I would’ve believed it.

I took to listening to the audio-book as opposed to reading this book because I tend to have a harder time with historical fiction (especially with the way they talked in the 1700s), and I loved it!  The reader of the story, Cassandra Campbell, has a beautiful voice that is easy to listen to and I enjoyed the way she voiced the characters.  I can still hear them in my head at times, and she knew exactly how to make it so that the listener could tell who was talking before she clarified it in the narration.

The story itself, as I said before, is just beautiful.  There were complications through the story that seemed ridiculous, like an arranged marriage, but it fits into the time-frame of the story.  And not really knowing much about this historical relationship, I was on edge wondering if they’d overcome the obstacles thrown at them and end up together (seriously, I knew nothing of their relationship).  I loved them together, even when they first met in the beginning of the story because of how hard Eliza was trying to not like Alex, but eventually let herself succumb to her feelings.

The way the author wrote the story was so engaging – I found myself talking out loud at times for Alex and Eliza to take action at certain times, or laugh out loud (in public) at some of the characters’ witty comebacks.  And there were those sweet moments when I was smiling like an idiot (again, in public) because the story got to be so adorable.

5 stars to Alex and Eliza, the audio-book version.  I haven’t read the book, but I’m planning to in the future (maybe right before the sequel comes out next year).  I’ll still recommend the book, but I’d say that you should take a chance on the audio-book as well, whether you listen to while reading or just listen to it.  It’s beautifully read and I’m tell you, the voices of the characters will stay with you long past listening to it.

One thought on “Alex and Eliza [audiobook review]”