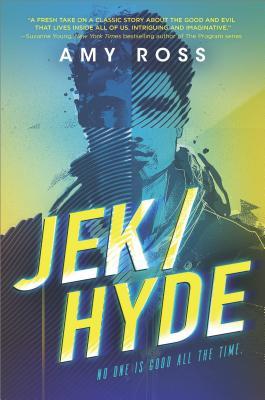 Lulu and Jek are science nerds, and have been best friends since they were young…or at least they used to be. Lately Jek has been pulling away from Lulu, just as she’s coming to terms with how she really feels about him. Just as she was ready to see if there could be something more between them.

But Lulu’s thoughts are derailed by a mysterious new guy who’s showing up at local parties. Hyde is the definition of a bad boy, and everybody knows it…but no one can seem to resist his charms. Girls can’t stay away from him, and guys all want to be him. And even though Lulu’s heart belongs to Jek, she can’t deny Hyde’s attraction either.

She also knows that there’s something not quite right about Hyde. That the rumors of his backwoods parties make them sound a little more dangerous than what any of her friends are accustomed to. And she doesn’t like the fact that Hyde seems to be cozying up to Jek, and that they seem to be intertwined in ways that have Lulu worrying for Jek’s safety.

If Hyde has a dark secret, Lulu is determined to find out what it is, and to help Jek…before it’s too late for both of them.

Though I hadn’t read The Strange Case of Dr. Jekyll and Mr. Hyde before reading this book, I knew I had to right away after reading the author’s note that she wanted to stick as close to the original story as she could.  Ross takes this classic tale and spins it with her own flair to fit a new generation of readers in a setting they can relate to, and I think that’s what I like most about the book.

I knew right off the bat what the connection between Jek and Hyde was while reading this because I had seen many cartoon adaptations of the original.  Even if you don’t know, it becomes pretty obvious each time Lulu encounters Hyde when she’s trying to find Jek.  It was the end that actually surprised me, and it seemed to come on very quickly.  I was happy that Lulu had been able to witness the transformation rather than just be told about it, though I can’t help but feel bad for her character afterward.

Going into the story I thought I’d be wanting to root for Lulu and Jek to get together, as Lulu’s feelings for Jek are clarified right in the beginning.  However, I found that I was rooting more for her to figure out the truth of Jek and Hyde than her and Jek’s romantic relationship.  And though they were together for a brief time, I found that to be my least favorite part of the story.  I can’t say that her feelings were completely irrelevant to the story though, because I feel it’s those feelings she has that keeps her going to protect Jek from Hyde.

Though some people were expecting it to be different than the original, I loved the fact that it’s more of a retelling of Jekyll & Hyde.  It’s a classic based in modern times, which I feel makes it more appealing to today’s generation.  Though the original should still be taught, I think that young readers who decide to read this first might have an easier time with the original later on.