An auditorium packed full of students and teachers… and one of them has a gun. 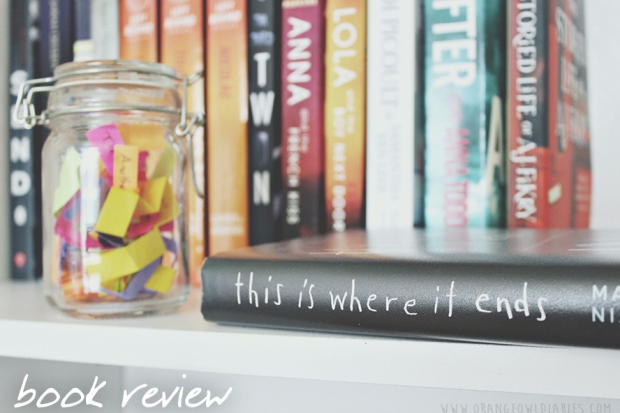 When picking up this book, I expected nothing less than to be on the edge of my seat and moved to tears while I read it.  Unfortunately, this book was not as moving as I thought it would be.  While I was on edge wondering what would happen to each character, the book was lacking in some aspects.

The book follows the POV’s of five different characters, and all of them know each other in some way.  We get the look of what’s going on inside the auditorium as the shooting is going on, but we also get the view of the characters who are on the outside of it all.  I personally didn’t connect with all of the characters, or even like them all.  Don’t get me wrong, I felt sad for those who lost someone in the events of the book, but it’s hard to actually feel the loss yourself when you don’t know the characters very well.

Other than not being able to really get to know and relate to the main characters of the book, there was a major lack of motive for the student shooter.  The kid was not bullied in any way and does not show any signs of a mental illness.  We do see that he has suffered a loss and abuse at home, so we can reason as to why he is hurting in some way, but from what I know that sort of thing doesn’t ususally motivate a kid to pull a gun out on his classmates.

I will go back to my point that I was on the edge of my seat while reading this.  Even though I did not relate to the characters that well, I was still scared for them while the shooting was going on.  I wanted to know if the characters on the outside would be able to get help in time to save their loved ones and if the characters on the inside would all survive.  I was also waiting to find out what motivated the shooter to do this, but as I said eariler, there was no real motive against the students or faculty.

Overall, I would give this book a 2.5 star rating since there were some things I liked about the book.  I feel it would’ve been better if we followed only two or three characters’ POV’s as opposed to five because we could’ve gotten to know some of them better which would’ve made the losses in the book more emotional to us readers.

2 thoughts on “This Is Where It Ends [book review]”