Another month, another Recent Reads post hitting your feed!

This month was weird.  It just felt like it went so fast, yet it seems like the books I read last month were ones that I read ages ago – not just a few weeks.  Perception of time is a weird thing, though usually it goes too fast for everyone.  There’s only 30 days until I start school again, 22 days until vacation, and before we know it… it’ll be Christmas and New Year’s again!

Ugh, anyway… onto the books I read this past month (I mean, that’s why you’re all here, right?)

I read all new books this month – no rereads – which surprised me because there are a few that I really want to reread this year.  I’m actually thinking of saving those for when I’m in school and decide to make my monthly reading loads a little lighter.

One of Us is Lying was the first book I read this month, and I really enjoyed it!  I don’t usually read mysteries, so it was fun to wrack my brain figuring out who killed Simon and how many people were involved.  I had actually dismissed my first idea of who killed him early on, and it turned out my first inkling was right.  That just goes to show you, never stray from your first instinct.  I’d recommend this book for anyone who likes a good ‘whodunnit’ story. 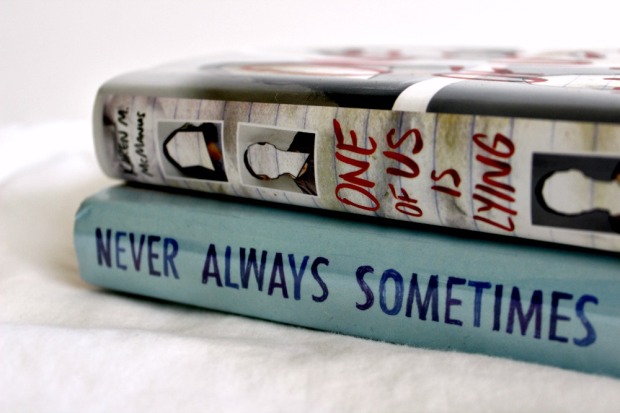 Next was a book that I found at work, Never Always Sometimes.  Although I can’t stand the “best friends falling in love” cliché, I still (sometimes) find them adorable.  I was actually happy with the outcome of the book despite my one true ship of the story not happening.  To be honest, I was rooting against Dave and Julia getting together the entire story and I was more interested in their characters than their possible relationship.  Dave was a sweetheart and adorably shy, and Julia was a riot!  Honestly, I’d recommend this book just for their characters and their best-friendship alone.

Now for the book I was excited about because, and I kid you not, the cover.

What To Say Next dealt with a budding friendship between Kit, who just lost her dad, and David, an autistic teen.  Being in David’s mind gave me a little more understanding of just how autism can be in a person, though like he said near the end of the book…

I’ve heard great things about this author and she did not disappoint.  I’m looking forward to reading more of her books, including Tell Me Three Things.  It might not be right way (because, you know, huge TBR list as it is), but at least I’ll know that I enjoyed one of her books.  I’d definitely recommend this book because you will definitely love David to death! 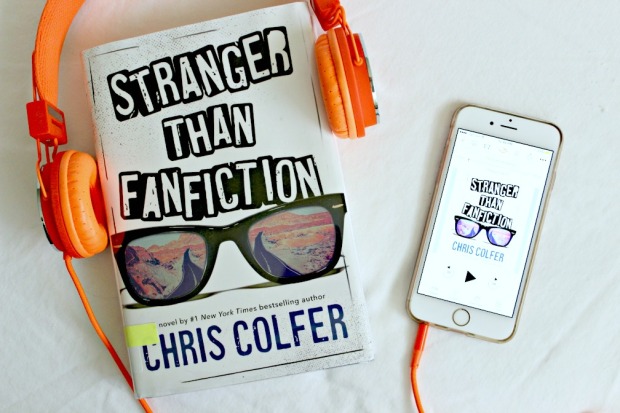 The next book I read and listen to at the same time.  Stranger Than Fanfiction by Chris Colfer.  I tried just listening to the audiobook when we first got it in at work, but I just could not pay full attention to it.  However, I loved how Chris Colfer read his own book, so I decided to get a free trial of Audible to download the book on my phone and simultaneously read the book (which I took out from an out-of-town library).  It was an interesting experience to read and listen to the book at the same time, though I won’t be doing it again anytime soon.  I found that I read faster than Colfer narrated, so I had to keep back-tracking on the page.  The book was interesting for the most part; though there were definitely things I didn’t like about it because I don’t agree with those views.  And out of all the characters, Mo was the best – no question!

And finally, the last book of the month was The Mark, the eighth book of the Left Behind series.  It had been a while since I read the seventh book, but things came back to me as I read on and soon enough, I was done with the book.  I highly recommend the Left Behind series, even though  I’ve got four more books to go, because they keep you hooked!  The characters are great and the fact that it’s all based on the soon-to-come events of the book of Revelation in the Bible makes it a hard-hitting series – especially as a Christian!

And that has been the longest Recent Reads post I’ve ever written.  Yikes.

Oh, and I’m also currently reading Every Young Woman’s Battle on my new Nook Glowlight Plus, and I’d definitely recommend this book to Christian girls in their teenage years and early twenties!

What did you read this past month?