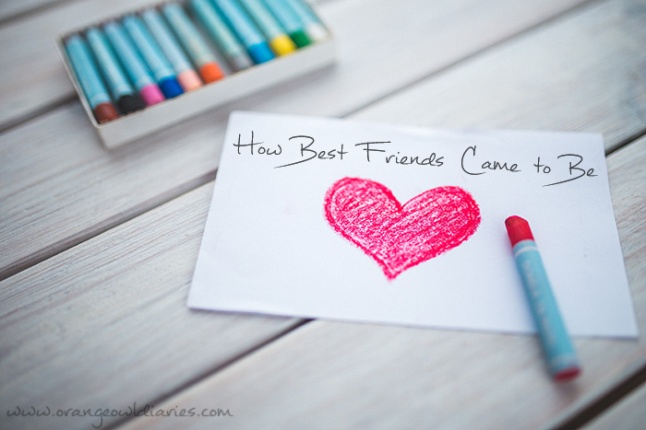 It’s August of 2003, the start of a new school year.  I enter my first Spanish class of the year.  There aren’t many people I know and I will not come to be close to any of them by the end of the year.  There is one person, however, whom I end up chatting with occasionally when working on projects.  Little do we know that something amazing is in the works.

The following school year we are again in the same Spanish class and now sit in the same group of tables with two other classmates.  The four of us bond over our antics in class, but only one of those friendships will truly last.  My newest friend and I find out later that year that we will both be attending the technical high school in our city, which makes our transition into high school that much easier.

“Five minute,” we say to each other, accompanied with a high-five before we head to our separate homerooms.

We have English class together in freshman year, right after homeroom.  Though homeroom lasts much longer than five minutes, the saying remains the same.  We find that our short time in the morning is not enough, so we begin to make plans to hang out.  Thursday quickly becomes our day and my house becomes our domain where we occupy our time with writing, watching videos, fan-girling over the Jonas Brothers and occasionally burning brownies (well, once).  Freshman year is coming to a close and we have to choose a shop to spend half of our time in for the next three school years.

It works out in our favor, as we never end up having a class during the academic cycle for the rest of our high school years.  Our continued time together both in shop and on Thursdays leads to more antics that can only be described as our best-friendship, which quickly reaches a point that is beyond weird.  What other way is there to describe friends who play with ketchup packets and argue on instant message, when they’re sitting next to each other?

“Get the phone so we can order food.”

“You’re right next to the phone!”

Fast forward to six years after high school, January 2015.  Right now.  We are thankful to have attended the same community college and state university, though we majored in different areas and she finished her degree last semester.  We don’t see each other as much as we did in high school and our early college years, but when we do have the chance to get together, it’s like we saw each other yesterday.

So to end this in the most cheesy way possible, I could not have asked for God to bring a better best friend into my life.  She gets me; I get her.  Our friendship in on such a different level (possibly a planet) that nothing and no one could ever come between us.

2 thoughts on “How Best Friends Came To Be”