First of all, thank you NetGalley for an e-ARC copy of this book in exchange for my review.  I blasted through this book in two sittings (reading 80% in the first sitting)!  So here we go! 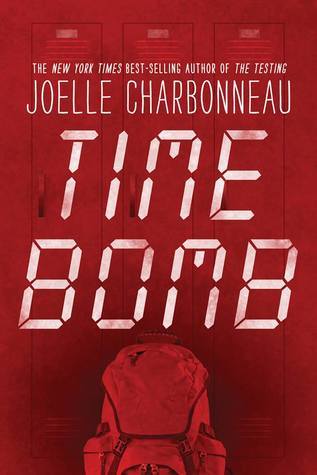 A congressman’s daughter who has to be perfect. A star quarterback with a secret. A guy who’s tired of being ignored. A clarinet player who’s done trying to fit in. An orphaned rebel who wants to teach someone a lesson. A guy who wants people to see him, not his religion.

They couldn’t be more different, but before the morning’s over, they’ll all be trapped in a school that’s been rocked by a bombing. When they hear that someone inside is the bomber, they’ll also be looking to one another for answers.

Time Bomb has to be the most gripping novel I’ve read this year; I had such a hard time putting it down!  It’s one of those books where after you finish, you wish you hadn’t read it so fast, but there’s no possible way you could’ve taken your time with it.

I will admit that I was wary of the focus shifting to more than three characters, because it seemed like six perspectives was just too much.  I was wrong though.  Charbonneau pulled off going between each character flawlessly and after the first few chapters I barely registered the change at all, especially when the six come together in one of the classrooms to try to escape the building.

Each character gives a shifty reason as to why they are at the school a week before classes resume, some of which are easy enough to figure out and others remain a mystery until they are revealed.  When they hear that the bomber is still inside the school, they begin to point fingers at one another, even though they cannot be sure the bomber really is one of them or not.

The book covers a variety of issues with racism, bullying (to an extreme), sexual orientation, and having to uphold a perfect appearance as to not disappoint people… you know, along with the whole idea of a school being bombed.  It shows how people are quick to point fingers because someone is of a race/religion that is often put into the spotlight, and it’s hard to not feel bad for those who are victimized because of this outlook.

One last aspect I really appreciated of this book was that Charbonneau was able to write an effective YA novel that didn’t need to have a focus on romance, sex, or having the characters curse every other sentence.  There are a few minor curse words used, but at seemingly appropriate times in the story.  The fact that Charbonneau kept this a relatively clean novel (aside from the bombing and gun violence, of course) is admirable.

I highly recommend this book once it comes out next year!  Set your calendars for March 18, 2018 because that is when the book is hitting shelves, or do yourself a favor and pre-order it now!  You will not regret it!