I recently went to my old middle school and high school to donate copies of my book and do a little bit of promotion (at the middle school) to hopefully get them interested in reading Standing By.  Going to the schools was surreal, of course, since nothing has really changed inside of them. It’s even more surreal going back as an author and bringing my own work in for future students to read.

Going into the middle school was a little more weird because though it didn’t seem very familiar, I realized walking in the first floor area that a part of that school was what I was seeing while writing my book.  This is fitting since the characters were created there, when I was only 13 years old, but I hadn’t even realized that I was seeing that particular part of the school while I was writing.  It’s where the cafeteria doors are and nearby is a staircase that goes up to the second and third floors (the same ones that Eric, Edwin, and Julie take at different times in the story).

Other than that, I barely remembered the middle school (haha). 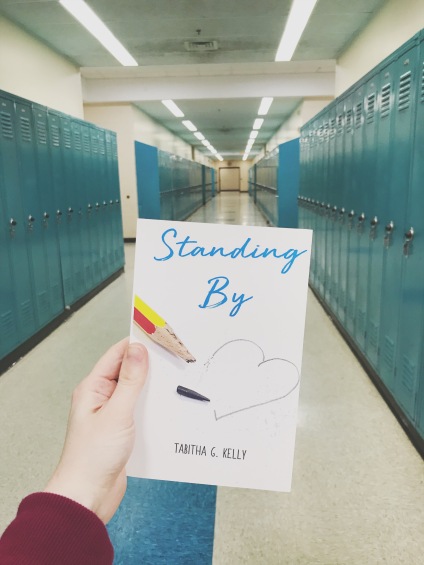 the halls of the middle school where my characters were created

Then, visiting my high school had felt like I’d never left, though it’s been ten years.  Some parts I had forgotten how to get to, but as I walked in the halls, it all came rushing back to me.  I also saw more familiar faces there in the staff, which made me happy to see that some of them were still there and I was able to catch up with them.  And one thing that was funny was how small the school seemed.  I know it’s a smaller school to begin with, much smaller than the city high school across the street, but going through the halls the school seemed very tiny.  I find this hilarious because I have not grown since I was twelve.

Maybe it was because while I was a student I was rushing to get to class and trying to navigate through the rest of the student body.  This time I was mostly alone because classes were in session while I went to visit the librarian and old teachers of mine.

Either way, this week brought back a lot of memories and I am glad I was able to visit both schools.