I was inspired by Seth’s post “I’ve Got House Pride, Do You?” touching on being sorted into Hufflepuff on Pottermore and it got me thinking…

Why didn’t I think of posting on this topic?

I was probably bound to think about this topic sooner or later.  Seth just beat me to it, but I’m glad he did.

Many moons ago, when J.K. Rowling first opened up Pottermore for her loyal fans, I was among the ones who were eager to join as soon as possible.  Though I only go on the site once a year now (maybe twice), back then I wasted no time joining and getting sorted into my house.  Looking back, I should not have been surprised at which house the Sorting Hat placed me in since the many Harry Potter quizzes I had previously taken online all sorted me into that same house… 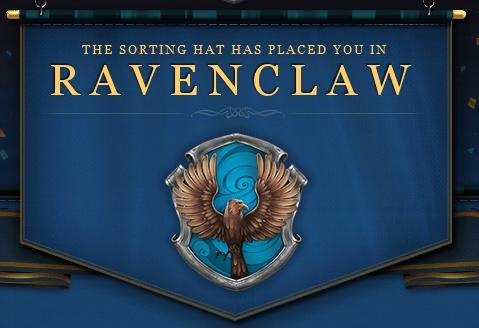 I kid you not, every time I take a sorting hat quiz, I get sorted into Ravenclaw.  Just last semester my university hosted an open social event that was Harry Potter themed and they had it set up similar to the Great Hall in the movies, and right at the front of the room there were two computers where you could get sorted into your house.  Any guesses where I got sorted into?  Yeah, you already know – Ravenclaw.  I even had an old coworker of mine tell me that I would be in Ravenclaw if Hogwarts was a real place.

The thing is, when I first got sorted into the House, I wasn’t very convinced that I should be in that particular one.  Then again, I didn’t see myself in Gryffindor or Slytherin either… however, I could possibly see myself in Hufflepuff, especially after reading Seth’s post about the House.  But I guess the Sorting Hat thought differently.

Ravenclaw, the house of the clever ones.  Not that I don’t consider myself smart, I am, but I can also be somewhat lazy (at least when it comes to science and history classes).  It wasn’t until I read my welcome message from Pottermore that I truly accepted myself as a Ravenclaw.

I chose that particular paragraph because the first few sentences fit me pretty well.  I have always been different than my peers, whether they know that or not.  I have a different style of creativity and I can just about guarantee that my imagination is much more active.  I am definitely what you would call an eccentric person.

I’m just also on the quiet side of eccentricity.

So since mid-2011 I have been proud to say that I am a part of the Ravenclaw house.  To be honest, I don’t think I would’ve cared which house I was sorted into; I don’t get crazy over this sort of thing.  Besides, being in a particular House doesn’t define the people of the House.  Sure, the Gryffindors are brave, Ravenclaws are clever, Hufflepuffs are loyal, and Slytherins are cunning, but those are just the general stereotypes for each House.  I don’t buy into stereotypes, most of the time.

After all, if the shoe fits…

“As we’ve learned from the books and movies, the House doesn’t define the wizard.  So don’t be ashamed of what House you were sorted into, be proud…”

Seth, Tales of a Triplet

Anyway, my point is, though I wasn’t entirely sure I had been placed into the right House when I first took a Sorting Hat quiz, the more I looked into it the more I saw that I was placed in the right one.  The lesson here, be proud of who you are and don’t give into the stereotypes that might surround you.

8 thoughts on “The Sorting Hat Tells No Lies”