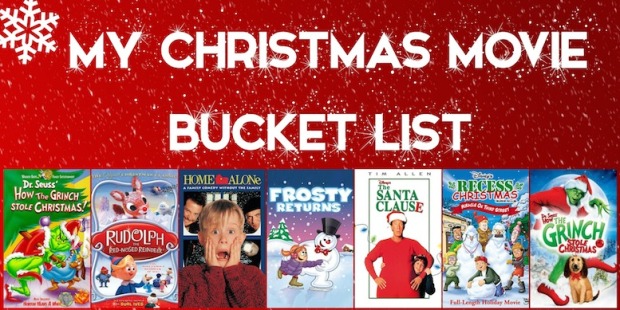 Well ladies and gents, it’s December 1st!  I don’t know how many of you watched the 50th anniversary special for A Charlie Brown Christmas, but I thought the behind the scenes take on it was pretty cool.  I’ll admit, I didn’t watch the entire thing though… only about half of it.

Now that it’s December though, it’s publicly acceptable for me to watch my Christmas movies.  Though that doesn’t stop me from watching them any other time of the year… especially in July.

Most years I seem to miss watching a Christmas movie that I had meant to watch, but just forgot about.  So this year I’m posting my Christmas Movie Bucket List to ensure that I watch all of my holiday favorites at least once.

Now, if you noticed that Elf is not on my list… I purposely did that.  I am probably the only person other my mom who doesn’t like that movie.  I can’t tell you why, I just don’t like it.  Never have, and can pretty much guarantee I never will.  I also realize that Frozen is not a Christmas movie per se, but it’s winter themed so it works for me.

So other than Elf, if there’s a good Christmas movie that you know of and didn’t see on my list feel free to make a suggestion because I’m going to watch all the Christmas movies I can this month, even after Christmas Day.  Like I said, there are no boundaries to when I watch Christmas movies.

What are some of your favorites to watch each year?