It’s been three years too long since my mom and I have had cats.

We planned on getting them last year when we moved into our current home because cats are allowed there, but we never ended up getting them.  Finally, a few weeks before we took our Vermont vacation my cousin told us about her friend whose cat just had kittens.  My mom got in touch with her and now we have two precious little furballs that are two months old.

For the first time I can remember we did not name them right away.  We had some ideas based off pictures we got of them when they were 3 weeks old, but they looked a little different when we got them home.  So for the first day we didn’t have names for them and kept playing around with different names.  I was torn between two for the little orange kitten and my mom had a nice long list for the black kitten.

I finally chose Theodore (aka: Theo) due to the fact that he’s shy and his longer hair makes him look a little chunky, and it reminded me of Theodore off Alvin and the Chipmunks.  Plus he tends to copy what his brother is doing.  His full name is Theodore Thomas (you know, for when he misbehaves).

My mom named our little black kitten Charlie.  She chose it originally because she loves the Peanuts gang, but we’ve decided his full name is Charles Reagan.  We still call him Charlie Brown at times and it works because if you think about it, the kittens probably hear us talking like the adults in the Peanuts show (wha-wha-wha). 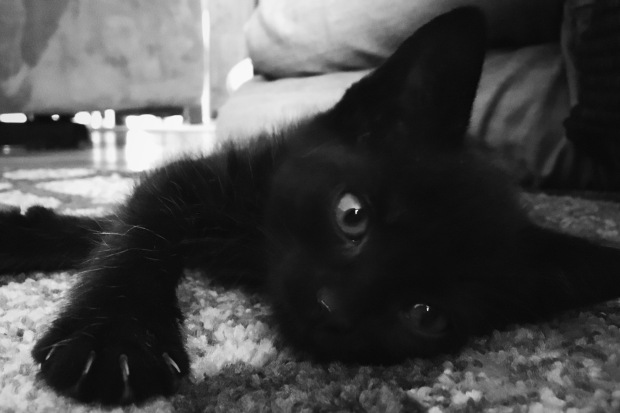 During the course of trying to name them, my mom happened to look up the word ‘cat’ in Hungarian and considered naming Charlie “Macska” (much-ka).  Obviously, it didn’t stick, but now we keep calling them ‘macskas’ when they’re in hiding or getting into some kind of trouble.

All I can say is that I’m very happy to have cats again and love these little guys we’ve been blessed with.

One thought on “Our Fur Babies”