That was the last text Carver Briggs ever sent to his best friend Mars, who was driving back from the movies along with their other two best friends, Eli and Blake.  He never got a reply to his text. The police found a half-written response to Carver on Mars’ phone after his car rear-ended a stopped truck, killing the three boys.

As if the misery Carver feels after losing his three best friends and has to take on senior year without them, his guilt outweighs everything else.  Eli’s twin sister is turning everyone in school against him, claiming that he killed them with his text.  Mars’ dad, a powerful judge, is pressuring the local DA to open a criminal investigation of the accident – looking to place blame on Carver for the death of his son.  And Carver doesn’t blame them – he blames himself too.

He does have allies though, apart from his family.  He begins spending time Blake’s grandmother, Nana Betsy, who enjoys the company of her grandson’s best friend, as well as with Jesmyn, Eli’s girlfriend, and the two find comfort in each others’ presence after their loss.  Carver also begins to confide in his therapist, who has an interesting tactic to help Carver cope with everything going on.

One day, Nana Betsy asks Carver if he’d like to spend a ‘goodbye day’ with her to share their stories of Blake and do the things Blake liked to do as a way of saying goodbye to him – the goodbye they didn’t have.  Carver agrees, and soon the other families are reaching out to him for their own goodbye days, but he is unsure of their motives.  He is hoping that through these ‘goodbye days’ that he and the families will make peace with their losses, all the while hoping that he won’t be thrown in jail. 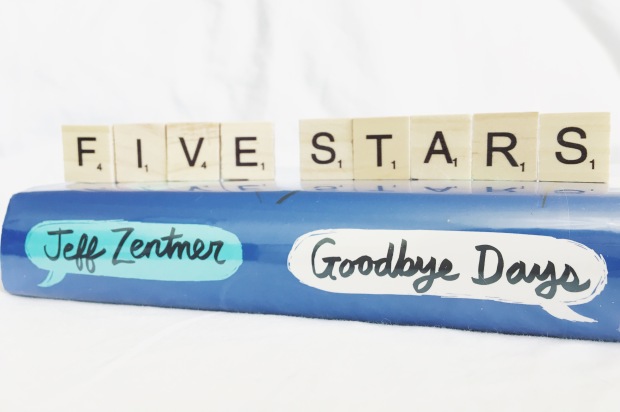 This book tore me apart emotionally.  The author does well to cover the different ways the loss of the three boys affected their loved ones and I empathized with each person, even if I didn’t necessarily agree with some of their actions.  Some of the best parts of the book were the times Carver was describing little moments he remembered with his friends, such as meeting each of them in eighth grade.  It was saddening that those moments were few, and that Carver wouldn’t have the chance to make more of those memories with his friends.

Goodbye Days gives an honest take on grief, guilt, and consequences.  More so, it shows us how we can heal through the celebration of dreams, passions, and friendships.  It teaches us to value our time with our loved ones while we are still here and to not hold back.

If you haven’t read this book yet, what are you waiting for?  Pick up a copy and get to it!