Most of us grew up with that one special childhood toy that we kept until adulthood or still have among our possessions.  Typically, at least for my age group, we had a special blanket or stuffed animal and we reason that we’ll keep them for our future children.  Of course, as some of us grow older we are unsure of whether or not we wish to have children – which is where I currently stand.  Still, I have two special pieces of my childhood – my teddy and “blankie.”

The two go together, though I had one before the other.  If I remember correctly, my mom always told me that I got my blanket a few months after I was born and that I’ve had teddy since the day I was born.  I do not remember who it was that got me the blanket, but I do still have it (though it’s a bit worn from over the years).

The story of teddy’s origin, I do know.  It was probably a few days either before or after I was born when my dad saw it in one of those crane machines full of stuffed animals, and I don’t know how many times it took him, but he got it out.  So it doesn’t seem like a grand story, but if you’ve ever played those crane machines, you know it can be very hard to get the item you are trying for. 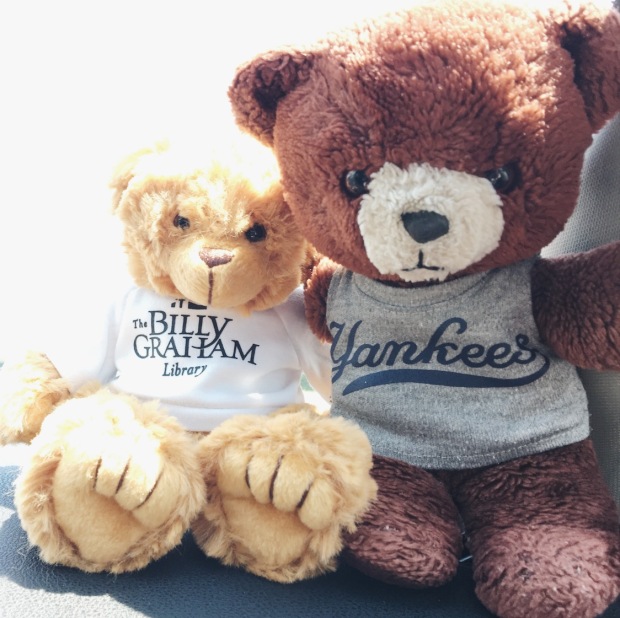 My childhood teddy on the right.

Teddy has been with me through a lot of moves across town since I was around five years old.  Honestly, it’s amazing that I still have both my pieces of childhood after all the times we’ve moved because God knows I’ve lost plenty of other items from different moves.

I realize that it’s childish to hold onto a piece of my past like a teddy bear or baby blanket, but I know they come from a special place and they hold a lot of memories for me.  Like the time that my teddy’s arm ripped and my Gramma had to “operate” on him and sew his arm back together.  or when he finally wasn’t naked anymore because I’d found a tiny white t-shirt for him and later on the Yankees tank he currently sports.  It’s memories like these that make the items special.

If I were to have kids, I am not entirely sure I’d give them my own teddy bear or get them each their own new ones.  They would be able to make their own memories that way, and then when I passed on they could fight over mine (if they even wanted it then).  That’s far in the future though, and I can honestly say at this point that I’m not even sure I want kids of my own (but I’ll save the reasoning for that for another post).

Do you still have any items from your childhood?

3 thoughts on “A Piece of My Childhood”