So earlier this summer I got to go to the first ever Hartford Comic Con. Now for those of you who are unfamiliar with Comic Cons, they are pop-culture and comic book conventions where you can buy artwork, merchandise, meet celebrities and take part in cosplay and costume contests. This was something I never thought I’d see myself at, but the day before it started my coworker texted me and asked if I’d be interested in going because they had an extra press pass.

So I went and because the three of us had press passes we got in for free. We also got special access to interview some interesting people there and film for one of the shows we produce. One of the celebrities we got to interview was Kyla Kennedy from The Walking Dead, so my coworkers were very excited to get to talk to her. I will admit I had no idea who she was because I have never watched the show. However, there was one celebrity there who I did know and had seen in numerous TV shows – Brando Eaton (Zoey 101, Dexter). 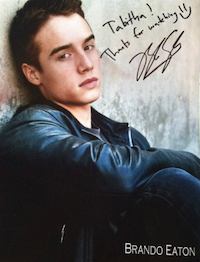 My autographed picture from Brando!

I had looked up the Hartford Comic Con information the day before and saw that he was going to be there and that’s when I got really excited to go. I waited until nearly the end of the first day to finally get to meet him and get his autograph and a picture with him. We also got to interview him for our show on the second day of the convention.

You know how people are always saying that celebrities are just regular people? Well, they are. Brando is such a nice guy and was even giving out hugs to people just because he wanted to. When we covered his panel on the second day of the event he was goofing off before it got started and cracking jokes with the people in the audience. On that note, Kyla Kennedy was a very sweet, well-spoken girl for her age. It was refreshing to see an eleven year old who actually had manners!

So even though I really only got to talk to Brando and Kyla for a few minutes, it was something I’ll never forget.

One thought on “Meeting a Celebrity, or Two”